More than 15 years ago, the last tenants vacated a 420-unit apartment complex that spans an entire city block on the south side of Chicago. The building, which is now known as Rosenwald Courts, was originally constructed in 1929 with the help of Julius Rosenwald, then-president of Sears, Roebuck & Company. 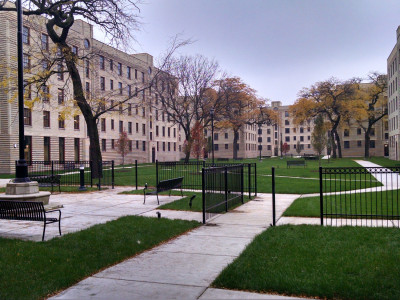 The original inspiration for the complex was the Dunbar Apartments, built by John D. Rockefeller, Jr., in Harlem in 1926. However, Rosenwald also wanted something that reminded him of his trips to Vienna. At the time the stylish Rosenwald building was constructed, it served as a home for many well-known Chicagoans, including Quincy Jones, Nat “King” Cole, Jesse Owens and Gwendolyn Brooks. Its importance in Chicago and African-American history earned the building a spot on the National Register of Historic Places in 1981.

The building housed many tenants through the years, until a variety of maintenance issues forced the complex to shut down in 2000. When the last tenant moved out, the historic Rosenwald Courts building was left to decay and eventually became uninhabitable.

After being abandoned for 15 years, the 85-year-old building was in desperate need of renovations to restore it to its former beauty while bringing it up to current safety code standards. Following a lengthy and complicated bid process, the Chicago Housing Authority awarded the fire protection contract to Ryan Fireprotection in 2015.

Ryan Fireprotection designed and installed 19 total systems, including 16 wet systems and 3 trash chute systems. The different types of systems are required because the building will include residences as well as 40,000 square feet of retail and office space. Mike Lowe, Project Manager for Ryan Fireprotection, and his team in Valparaiso, IN, began work in June 2015. The dedicated crew worked to bring quality service, while also keeping the project on time to meet the December 2016 deadline.

When the construction team started demolition in 2015, they were presented with unforeseen structural issues. The building is concrete and steel, and the bond beams in the building were a lot lower than anyone had anticipated. This unexpected challenge changed all of the elevations. In order to address the problem and fix the issue, the construction crew had to keep the ceilings as high as possible. This meant Ryan Fireprotection had to be flexible and coordinate their routing with the rest of the mechanicals, while also being as efficient as possible in order to keep the project on schedule.

Even with this challenge, the building is projected to be completed on time. “We had to work in conjunction with George Sollitt Construction and the developer to be flexible and solution-based in order to meet deadlines and code standards,” says Lowe. The design and project management team at Ryan Fireprotection led the way in creating an open minded environment to eliminate problems, which set the stage with Sollitt’s direction to help in the coordination process with all the crafts.

Completion Of The Project

The Rosenwald Courts renovation is set for completion in December 2016 and will once again be a great addition to Chicago’s south side and the Bronzeville neighborhood. Portions of the building have already been leased. The building is composed of 239 apartments, with half of the units being reserved for CHA senior residents. Approximately 40,000 square feet of retail space houses tenants including Sip & Savor Coffee, Shawn Michelle’s Ice Cream, King’s Kiddie Kingdom Daycare, and Illinois Service Federal Savings & Loan.